Well, Bikes, Blues, & BBQ is in town. This information is only for those that don't live here in NWA. If you DO live in NWA, then you've already known this: there are bikers everywhere. I by everywhere, I mean e-ver-y-where. Roaring down the streets on some tricked out bikes. Weaving dangerously in and out of traffic, causing all the non-motorcycle traffic to freak out and head to the median of the highways. It's a joyous time. And great people-watching!

Friday night, we went down to Dickson Street with the Cramers. We ate at US Pizza, then walked up and down the street, looking at the motorcycles (or bicycles, as Emma continuously calls them). For some reason, Emma was obsessed with finding red motorcycles and riding on one. We found plenty of red ones, but did not get the opportunity to ride (or sit) on them. We then watched a man juggle fire, which was pretty impressive. He's the same guy that does magic tricks on the square during the Farmer's Market. I took some video of it, and you can watch it here.

After blowing out our eardrums with countless motorcyles vying for the loudest rev-up, we went home. But Emma didn't sleep much last night...and neither did Allison. That's an entirely different post...so I'm moving on.

Today, after Emma's nap, I got the hankering to do a quick photoshoot with Emma. We packed up and went to the Shiloh Museum. This is a great place that Brooke showed us when we did our photoshoot there last Spring. Though it wasn't a very successful shoot, we at least got to get out and enjoy the wonderful weather. Tonight...we're crashing on the couch and watching a movie. Here are some pics of the weekend: 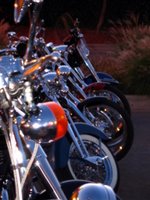 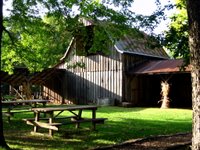 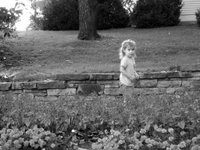 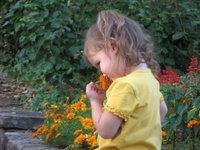 Ok, I just finished watching the season premier of Heroes on NBC. And I'm totally hooked! In fact, I haven't been this hooked since LOST began! My excitement levels for this show rival that of LOST and Alias' first season. It's absolutely amazing!

It's a little X-Men-ish in nature. Basically, a slew of individuals begin realizing they have "special" powers. These manifest themselves through teleportation, rapid physical regeneration, prophetic painting/artistry, the ability to fly, and more. Per some of the dialogue, this is caused by evolution / natural selection for the next breed of human kind. In future weeks, the characters will become interwoven and combine to stop a world catastrophe from occuring.

To be honest, this was easily the most well-done opener I have ever seen. The character development was well-captured and disclosed the perfect amount for you to connect with the characters, but not enough to over-expose them. The flow and logic behind the episode was perfectly done.

I really can't say enough about this show! It's the first time since LOST that I've been this excited about a show! If you missed it and would like to see the show, NBC is re-playing the episode tomorrow night (Tuesday 9/26). Give it a try...it's amazing!

By the way, this is a copy of my post from the TV Addicts blog. Stop by and chat it up!
Posted by John Nelson No comments:
Labels: TV and Movies

Everyone has experienced the inappropriate laughing syndrome (ILS). It when the giggles get you during some very inappropriate times, like Church, Funerals, Office Meetings, etc. This video isn't in English, but it's a perfect example of ILS in action!

Emma's First Trip to the Dentist

A couple of days ago, Emma made her first trip to see the Dentist. While there, she had her teeth x-ray ed and cleaned. Allison did a fantastic job of getting Emma pumped up to see the dentist, too! She bought Emma a "Dora Visits the Dentist" book, which seemed to be extremely helpful. Dora walks you through all the steps a dentist goes through, and even explains the tools the dentist uses! If Dora can do it, Emma can do it!

The long and short of it is this: Emma did really well for her first time. She flipped out a bit for the x-rays, and wasn't a fan of the flossing part. Other than that, she did really well. She did have a very small cavity on one of her back molars, but we're putting on some preventative stuff to help fix it.

It was a successful first trip to the Dentist, thanks to Dora and Allison. What a team!
Posted by John Nelson 1 comment:
Labels: Family

I have no idea what to title this post. I saw this on the Leonard's blog today, and thought it would be pretty fun to do, so here it goes.

The rules are: go to www.images.google.com and post the first postable image you find a result for: Emma recently watched "Madagascar" at my sister's house. At the end of the movie, the animals do a dance video (ala Shrek) to the song "I Like to Move It" by Reel 2 Real.

All day today, she has said non-stop, "I like to move it, move it!" and can't help but dance to the beat playing in her head. Since it's hard to express in words, I give you YouTube:

A few weeks ago, I went to Kansas City with my Dad to attend a Promise Keeper's rally. During the event, they showed a long video clip that talked about Discipleship and pretty much gave the true context for how Jesus called his disciples and why they could so quickly dropped everything they were doing and followed Him. It was an incredibly fascinating video, very well made. At the end, we found out it was from Nooma.com. They have several videos available to view online. You can also buy the videos to use in your ministry or for personal use. I recommend going and checking out some of the videos when you have 20 minutes of spare time...it's great stuff.

The video they showed at PK was "DUST".
Posted by John Nelson No comments:
Labels: Christianity, Ministry

I grew up with an older sister and 4 girl cousins.

Now I have a wife, a female dog, 1 daughter, and 1 daughter coming into the world here in a couple of weeks.

Yeah...I've spent my life surrounded by women. For the most part, I can talk fashion, paint colors, women's topics, and boyfriend/husband problems with most women. Man, that looks even sadder when it's written out.

So my uber-manly friend Josh recently let me come over and be more manly. Sa 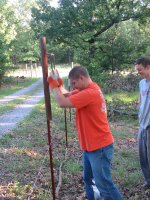 turday, I went to the Hale Farm and helped Josh put up fence around his driveway. I got to drive in a few T-posts, roll fencing, and hammer a lot. It was pretty fun, though I was pretty awful at everything. This was my first "farming" experience, so neither of us were expecting much from me.

The best thing was that Josh had a rooster that was driving him and Margo absolutely nuts. He crowed all the time, and they wanted him dead. So, I asked if I could kill him, which they let me! Josh busted out his 12-gauge sho 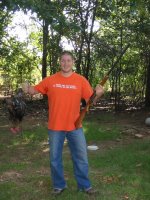 tgun, caught the rooster, tied him up, and gave me some quick instructions on how to properly shoot a shotgun. I stared down the barrell of the shotgun, and killed my first animal! It was actually pretty fun! Then he let me shoot his 30/30 a couple of times at a can. I wasn't so great with that one, but everyone walked away uninjured (except the can and the rooster, of course). It was a great time to boost my testosterone in my female-dominated life!
Posted by John Nelson 1 comment:
Labels: Adventures, Friends

I guess I'll now be posting all my new content on this page...it's the Beta Blogger that supports Tags and easy editing/adjusting. It's linked directly off my Google Pages website and my old blog, so hopefully you'll come back to see what I have to say.
Posted by John Nelson No comments:
Labels: General

If only Google could roll out their feature sets faster! Now, I absolutely love Google and the crazy cool things they are doing with me in mind: Gmail, Google Pages, Blogger, Picasa, etc. Now they need to work on integration!

For instance, right now, I can create a webpage (non-blog) on Google Pages, but I can't add my current blog (or this one) as a page to my website. Nor can I add my Picasa Web Albums as a page. Sure...I can link to them, but that's not nearly as fun or consolidated.

Anyway, I'm just testing out the new Beta version of Blogger to see how I like it. So far, it's not too bad. But I may stick to the old one. At least until they allow me to roll over my posts from the old version to the new one.
Posted by John Nelson No comments:
Labels: General
Newer Posts Home
Subscribe to: Posts (Atom)