Brooklyn was a fairy, but really wanted a name, so she became Thumbelina. Emma was a peacock. Brooklyn was tired of the fairy by October 31st, so she decided to pull from the dress up box and be Cinderella.

Halloween Day was a family filled day. We had pumpkin pancakes for breakfast and then carved our pumpkins. I should say that John carved the pumpkins with a little assistance from Brooklyn. Emma wanted no part in the slime! 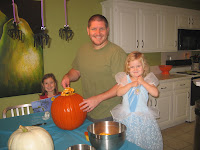 The Roberts' came over to eat pizza with us and go trick or treating around our neighborhood. For some reason, the Arkansas Athletic Dept chose to have Homecoming on Halloween, so we came home to watch a little of the game. The girls (and Belle) had fun handing out candy to everyone. Belle loves Halloween night because we put up the baby gate and she sits at the door looking out and waiting anxiously for someone to pet her. It was a fun night with friends!

The Hannon's went to the Razorback game, but they came over before to see the girls in costume and for Isaac and Luke to show us their "Razorback costumes" for the game. Sweet cousins! 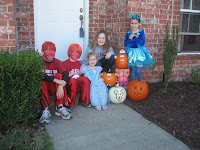