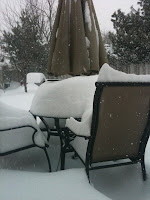 Another snow post! I keep getting our many snow pictures mixed up, but this one will be one to remember forever. On February 9th, Northwest Arkansas got more snow than they have seen in its history. I believe Springdale got around 21". I kept saying to the girls over and over, "I have never seen this much snow in my entire life!" It was beautiful.

When we woke up, my first concern was how Belle was going to go potty, but our smart doggie burrowed herself a trail to under the trampoline! I took a picture of her going out there, so we could have perspective on how much snow was actually 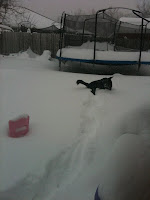 Northwest Arkansas was shut down. No one could get to work or school and we knew we wouldn't be getting out anytime soon! I loved it. I hated the idea of Emma going to school longer in the summer, but I loved being snowed in with my whole family. We did Valentine crafts, made cookies, ate, watched movies, ate some more, watched another movie, ate more and watched a few more movies. :) Once it stopped snowing, John took the girls outside to begin creating an igloo. They did pretty good, huh?

We stayed in pj's for days!

My birthday fell on one of the snow days and although our original plans of a kid-free weekend fell through, it was a good one full of memories. We were treated to a free dinner at Bonefish (by the head of Kellogg who was there and told the waitress he was covering our dinner!) with Allyn and Aaron. Then we all went to a movie. Allyn and I spent every single birthday together growing up, so it was fun to do that again! 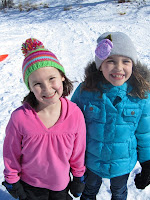 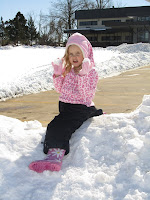 Once the snow had cleared enough for us to drive, we took the girls sledding. When we showed up, one of Em's besties, Elle, was there with her Dad and brother. Fun times! Little did we know that Brooklyn had an ear infection which would explain her lack of interest in doing much that day. She spent most of her time on top of a snow mountain eating snow. Much later that night, was when the ear throbbing started. Not fun. I took her to a walk in clinic on Sunday morning while John and Emma went to church.

We had plans of hiking that afternoon. Once Brooklyn had some medicine in her, she felt pretty good and wanted to go on the hike, so we went. It was an easy and short hike. We had never been to this place in Bella Vista, but we will go back and explore more. It was fun and very different to hike on snowy ground and see a snowy waterfall. Belle got to come and she was in heaven.