Well, it has been one crazy week! John posted some pictures on Tuesday and that was before we lost power for the next 55 hours. I vow never to take electricity for granted again. I HATE being cold and that was the worst part. I'm sure everyone's story is much the same, but I wanted to recap this week for us to remember. This is a long post, so please don't feel like you need to read it. I just wanted to write while it was fresh on my mind.

Monday night: I began preparing for what I guess was maternal instinct because the worst came true. I made homeade cookies and muffins for us to munch on for the week. I am so glad I didn't save this for Tuesday as an activity for Emma and me. We would not have had an oven. 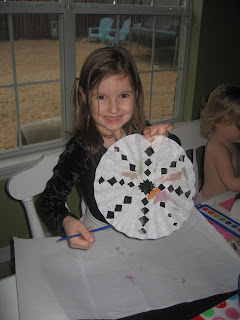 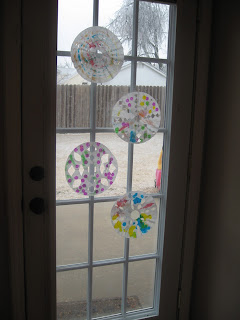 Tuesday: We woke up to a lot of ice, but it was only the beginning. John stayed home. We lost power around 10:30AM. At about 10:15, I had plugged in the crockpot in hopes of making some pulled pork tacos before we lost power. For the next 2 hours without power, the girls and I made snowflakes out of coffee filters and then painted them. John took pictures outside and alerted us when precious trees were falling. We ate lunch in the dark. At 12:30PM, the power came back on. At 2:30PM, it went out for good. I worked on a cleaning out project and listened as more trees fell. So very sad. We rounded up candles and flashlights before dark. John took the girls outside and rode down our driveway on sleds with them. Good times. Emma hated the cold and I think Brooklyn would have stayed outside for hours. The girl is a hot body. We had PBJ's by candlelight and then played Tea Party. (the flash made the picture look like daylight, but we did play this game in the dark) Brooklyn wasn't interested in our game, so she made a circle of books to sit in. :) John played some guitar for us which was a nice treat. I rounded up blankets and piled them on beds. It was going to be a cold night without power and without a working fireplace. The girls went to bed easily. John and I used the last of his laptop battery to watch 95% of Eagle Eye. Then his battery died. We hunkered in and went to sleep. 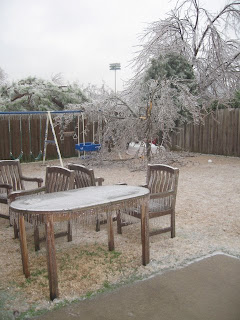 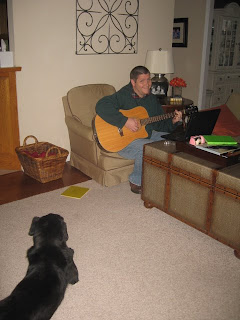 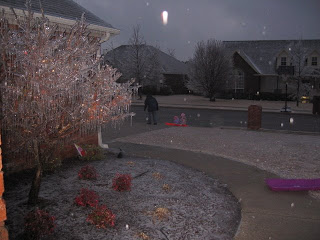 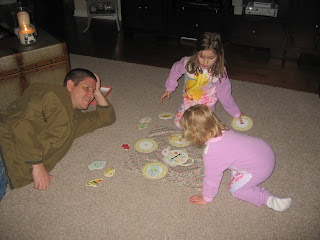 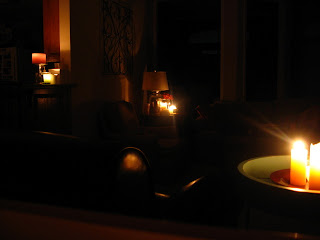 Wednesday: We all slept until about 8:00. I was actually very warm and toasty in bed, but once I stood up I felt the cold. It was about 54 degrees in our house. I threw on a robe and just began moving, doing anything I could to stay warm. We had some breakfast and then piled up to go to the John's sisters house for the day. I grabbed some frozen Potato Soup from our freezer, so I could heat it up on their gas stove. We were happy to be with other people. Especially people with a fireplace and a gas stove. John and Sam went out to find a place to charge phones and get some work done. They parked it at Chickfila for a few hours. Amy and I stayed home with the 5 kids. Brooklyn took a nap at their freezing cold house under many blankets in their guest room. When Sam and John got back, they took the big kids sledding in the vacant neighborhood across the street. We didn't get any pictures, but Emma had a blast. I wish I could have seen more of it.
About 4:00, I realized that our house was going to get even colder than the night before and decided to try to find a hotel. Everywhere was booked, but I finally found a room in Bentonville. They dropped their rates by $50 for the ice storm, allowed dogs to come, had an indoor pool and free breakfast. We went home, packed our stuff, grabbed Belle and headed north. The roads in Rogers and Bentonville were much worse than Fayetteville and Springdale, but they did not have all the trees down. Our friend, Todd, also got a room at this hotel. We all went to eat dinner at O'Charley's (Kids Eat Free) and then went home. It was already 8:00 and we knew Emma was worn out. BUT, you don't have a chance to swim in the middle of winter very often, so we went to the pool. John (who hates cold pool water) said he would get in with them and I was very grateful. The water was not extremely warm for being a heated pool. The girls had fun for the short time that John lasted! :) We went back to our room and the girls crashed. I took a much awaited hot shower! 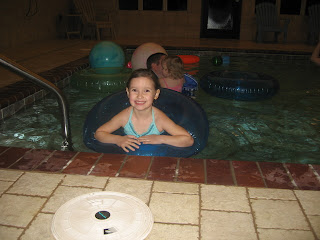 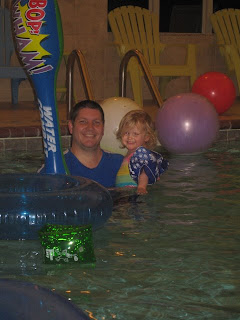 Thursday: Thursday was a debate of whether to stay in NWA or head to Little Rock with my family. I really didn't want to leave John and didn't want to get all the way to LR and hear our power came back. We booked another room at the hotel and told them we would cancel by 2:00PM if our power came back. John went back to work which left me to entertain the girls in the hotel. We packed up around 11AM and headed back home to grab some things and eat lunch. I had planned on taking them to the mall to eat and play on the playground, (BURN SOME ENERGY OFF) but the mall was closed. McDonald's was even closed. No one had power. Chickfila was open so we got food there and took it back to our cold house. At home, I asked Emma what she wanted to do (stay in NWA or go to LR) and she chose to stay. So, we stayed. I gave our neighbor my cell phone number to call when the electricity came back on and then we headed back to our hotel for Brooklyn to take a nap. I told Emma that we would need to pretend to go to sleep for a bit while Brooklyn settled in for her nap. Before I knew it, Emma was zonked out too. I tried to think back and I'm pretty sure the last time she took a nap was when she was 3 1/2 and we were at Disney World. I think this ordeal wore her out as much as it did us. We all 3 napped (4, if you include Belle) and I woke them up about 4:30 so we could go to Sam's brothers house for dinner. While eating pizza at their warm and cozy house, we got texted that our power was on. PRAISE THE LORD!!! We ate, drove to the hotel to grab luggage and Belle, and headed home. I have never been so happy to turn on my street and see front porch lights on!!! It was a pretty site. We got home late and finally got the girls in their beds by 10:00.

Friday: Emma woke me up around 7:30. I got up to do some things around the house and call a few friends that I knew still didn't have power to let them know they could come over for the day. I took a shower around 9. Brooklyn woke up around 10:00AM. She was making up for some lost sleep!! The Vaught's came over around 10:30 and spent the day with us. They still don't have power at their house. We made a warm soup and grilled cheese lunch. Our electricity went out as we sat down for lunch and it was a scary moment. It came back on about 3 minutes later and we again, PRAISED THE LORD! We finished the day by eating dinner with the Vaught's at La Huerta. Elizabeth and I enjoyed a yummy margarita after a long day with kiddos.

So, it has been an adventure. I won't ever take electricity for granted again and I WILL have our fireplace checked and in working condition as soon as possible.
We still have plenty of friends that are in the dark and very cold. Plenty of friends that have major trees down and lots of clean up to do (the Hales). All of Northwest Arkansas is damaged. It really looks like a war zone. NWA has the prettiest trees and so many have been destroyed. I'm not sure our skyline (I should say treeline b/c we don't have large buildings) will ever be the same. Say some prayers for our area and for those who are still suffering through the devastation.
Posted by Allison Nelson

What an adventure! Glad you are all OK.

Oh Al!! That all sounds CRAZY! I am so glad you are all up and running now. I don't understand the broken fireplace much (what does that mean? No gas?) but really glad you are okay!

Bless your heart!! What a crazy few days! What I love the most is how you guys still had fun by making snowflakes, swimming in a pool, and sledding even with the electricity out! You are such an amazing mom!