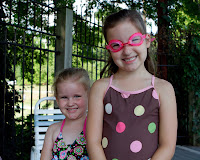 We went to Wilson Park Pool for swim lessons this year. I had heard good things about the lessons and the price was to good to pass up. We also had quite a few friends that were going to be taking there. The first few lessons, I thought I had made a bad decision, but by the end I really did like them. They were 4 days a week for 2 weeks and that was a lot. It might not have been as much had we not had other stuff going those weeks as well. The girls had fun and they really did learn stuff. Emma has been swimming since last summer, but she learned some strokes and did really well. She loved the time on the diving board and slide at the end of class. Her friend, Molly, was in class with her.

Brooklyn gained a lot of confidence over the 2 weeks in the pool. By the second or third class, she was going under water and loving it. She went off the diving board with someone catching her. She wanted to go down the slide SO bad, but it wasn't until the last day that she finally did it. She was so proud! Since swim lessons, B has been going under over and over again. On Tuesday, she decided she would go under and swim. I have a feeling we will have a little fish by the end of the summer! One of B's best friends, Whitlee, was in her swim class along with another friend Ruthie. They had a lot of fun!